Phillip Closius will serve as the founding dean of the Wilmington University School of Law, a program he believes will address many of the challenges in legal education today. | DBT PHOTO BY JACOB OWENS

WILMINGTON — Wilmington University plans to launch its new law school next fall, with a unique and innovative curriculum that addresses many challenges in legal education.

The private university based in New Castle quietly announced the school earlier this month, but detailed his plans at a Thursday news conference attended by state judges, prosecutors, private attorneys and educators. 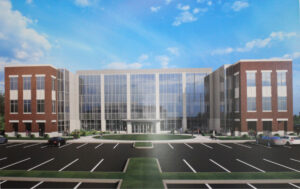 The university will build this new school on the Brandywine campus to house the law school. | PHOTO COURTESY OF WILMU

The law school will be based at WilmU’s Brandywine campus off U.S. Route 202 near the Pennsylvania state line, initially starting in Jack P. Varsalona Hall but later moving to a newly constructed building on campus when it tentatively opens in January 2025. It will target a student body of approximately 500, about 50% smaller than Widener University’s Delaware Law School.

The launch of a law school is a major expansion for WilmU, which has increasingly moved to meet the needs of working adults in recent years, particularly through its popular MBA and DBA programs. The average age of its 19,000 in-person and online students is 33, and 90% of them work full or part-time, officials said.

“We have always put students first and fostered an inclusive environment that provides academic excellence, affordability, convenience, and flexibility. Our law school will be no different,” said Laverne Harmon, president of WilmU. “We will serve qualified students from all walks of life, transitioning professionals from different careers, and others who may not have had the opportunity to attend law school.” 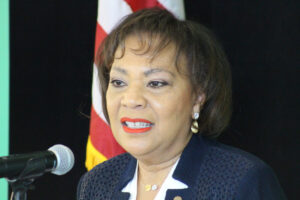 Harmon told the Delaware Business Times that the school had considered the possibility of a law school for most of its six-year tenure, but the COVID-19 pandemic has slowed discussions. They resumed more than a year ago when leaders saw an opportunity to serve more students, and the state’s recent Supreme Court report detailing the challenges of diversifying the bar and bench of the Delaware only encouraged their determination.

Phillip Closius’ interest in serving as the school’s founding dean helped in the decision. After serving as dean of the University of Baltimore Law School and the University of Toledo School of Law, he increased bar pass rates by 30% and job placement rates by 20%, while by spearheading the two biggest leaps for a law school in the history of the annual US & World News Report rankings.

Most recently on duty in Baltimore, Closius said he found a similar spirit in WilmU management when approached for the opportunity.

“I didn’t know much about Wilmington University before we started these discussions, and I really liked the people. And they give me the opportunity to kind of create the law school that I want,” he told DBT, saying it would be the cornerstone of his career. “I just see an opportunity here. I know it’s a small state, but for the things I want to do, nobody does.

Closius was referring to a single program that will set a required course load for the first two years to establish a solid foundation in several legal subjects for students, but opens up the third year of study – often deemed unnecessary by students – to experiential learning.

“They can follow almost all of the third year in the form of internships or experiential learning. They can take it all in doctrine courses or in a specialty that interests them, or they can do a mixture of the two,” he said.

The WilmU School will also incorporate Delaware’s five-month internship requirement for third-year bar admission to ensure costs are not burdened on graduates or small law firms in the start of their career.

To help students pass the Delaware bar exam, notoriously one of the toughest in the country, where only about two-thirds of applicants passed last year, WilmU School will administer exams in every class in the same proctored style as the bar exam. This will help students adjust to the experience before applying to take the bar exam, Closius said.

“We’re going to do our best to make sure people understand the opportunities that exist in Delaware and don’t shy away from them because they don’t think they can get past that bar,” he added. 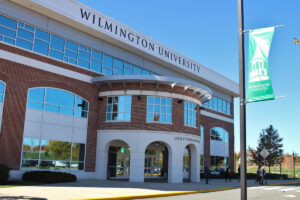 Wilmington University will open a law school next fall in an ambitious new chapter for private school. | DBT PHOTO BY JACOB OWENS

The school will aim to hire around nine faculty for its first year of study, and it will not limit the faculty to graduates of the most prestigious universities, instead emphasizing professional achievement and those looking to make an impact. on their students, Closius.

“Someone has to do something about law school debt,” he said, noting that on average his Baltimore graduates end up with $150,000 in student debt.

All of these programmatic decisions were also made in mind to help address the diversity, equity and inclusion challenges identified in the State Supreme Court Steering Committee report released earlier this year. Among the challenges identified were the cost of a law degree and expanding access to underrepresented students graduating from a community college or bachelor’s degree program, which WilmU could help address.

“We believe a law school is essential to implementing this plan,” Closius said, noting that he met with Supreme Court Chief Justice CJ Seitz Jr. to discuss it.

WilmU has already received applications from a few hundred prospective students in the area after news of the program broke, officials said, but applications weren’t launched online until Thursday.

WilmU School is not currently accredited by the American Bar Association, a requirement for graduates to take the bar exam in the states. Instruction will begin in August 2023, and ABA assessors will begin reviewing the school’s studies in fall 2024, with a decision on its accreditation around March 2025.

Closius is confident that the program they have designed will meet the ABA’s requirements, as WilmU is financially strong and has already been reviewed by the ABA for its paralegal program; management is familiar with ABA and the university is investing in a new facility for the school.

If the school was not accredited by the ABA in March 2025, Closius explained that the school would receive instructions from the organization on what should be approved and would be reassessed in the fall of 2025.

“We’re going to have two bites of apple before our first class graduates,” he said, noting that full-time law degrees are three-year programs while part-time programs are four. year.

Closius said the state’s legal community can help WilmU keep more of its graduates in the state by getting involved in their education, including internships, internships and mentorship programs for freshmen and college students. second year.

“We need an integrated bar to help us educate them and to help you get more lawyers into the bar. If they feel they have a home here, people will stay,” he said.

An advisory committee that will include the President of the State Superior Court, Justice Jan Jurden, will help develop the WilmU program; former Vice Chancellor Joseph Slights III; Michael Nestor, partner in the firm of Wilmington Young Conaway; and Kelly Farnan and Blake Rohrbacher, directors of the law firm Wilmington Richards, Layton & Finger.

Charles Durante, president of the Delaware State Bar Association and partner at Wilmington law firm Connolly Gallagher, said the need for new lawyers in the state has never been greater.

“Law firms that in the early 1970s hired one or two newly admitted lawyers are now trying to fill 12 to 15 offices each year,” he said. “The reputation of the Delaware court system at the state and federal levels has increased the number and types of cases that must be resolved in state courts, including corporate law, patent litigation, bankruptcy proceedings, trust controversies, etc. the talent is greater than ever.

Yale Law School Pulls Out of ‘Perverse’ US News Ranking