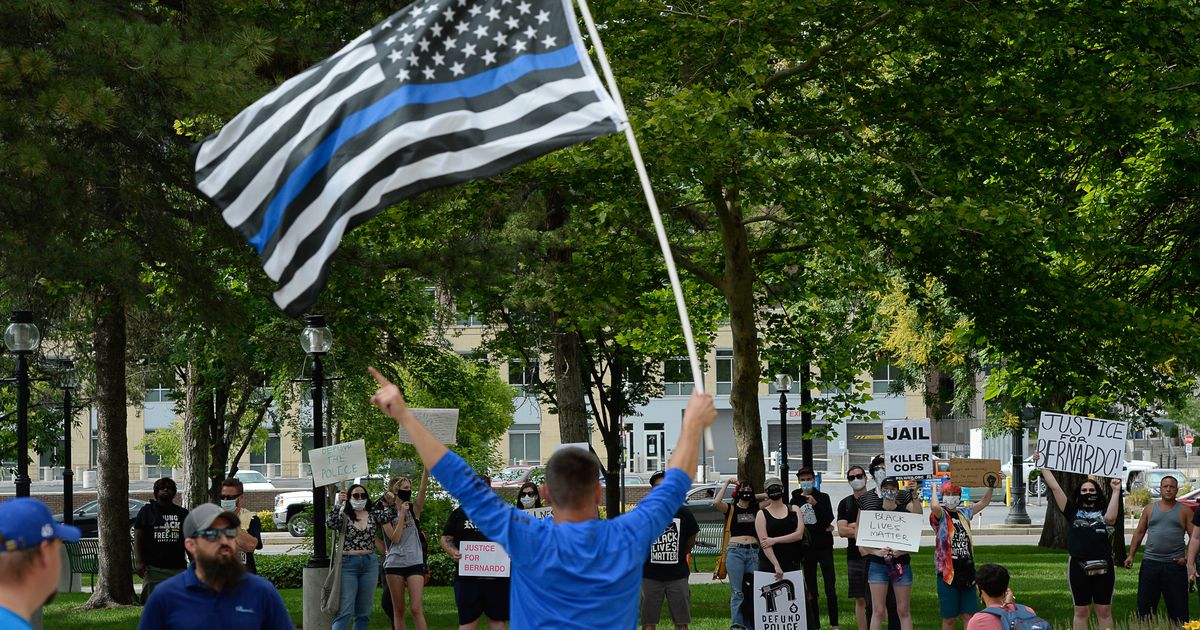 Law Charging Woman with Hate Crime after Stomping ‘Back the Blue’ Sign May Be Unconstitutional, Law Professor Says

The law allows higher charges for “intimidation” and not for crimes based on the characteristics of the victim.

A 19-year-old woman who was charged with an increase in hate crime in Garfield County after stepping on a “Back the Blue” sign made national headlines in July.

But a law professor who helped draft Utah’s 2019 hate crimes bill said the law she is charged under isn’t even hate crimes law – and could be unconstitutional.

According to the probable cause affidavit, on July 7, a Garfield County police officer was conducting a speeding check at a gas station when he saw a woman “stomping on a ‘Back the Blue’ sign next door. from where the traffic control was. conducted, crumble it destructively and throw it in a trash can while smiling in an intimidating way at me.

On July 9, the woman was charged with criminal mischief with an increase in hate crime, making it a Class A misdemeanor.

Clifford Rosky, professor of constitutional law at the SJ Quinney College of Law at the University of Utah, helped draft SB 103, which provides additional protections for victims of hate crimes. Rosky says the improvement in hate crimes in the Garfield County case is an improvement in “intimidation” because the case is not being pursued with reference to SB 103 – but rather under Title 76, Chapter 3, Part 2, Section 203.3 of the Utah Code under “Sanction for Hate Crimes”.

Unlike SB 103, the law in the Garfield County case does not list any particular protected characteristic but rather defines “intimidating or terrorizing” as “an act which causes the person to fear for their physical safety or damages the property of that person. person or another, “accompanied by” the intention to cause or has the effect of causing any person to fear or exercise freely any right guaranteed by the Constitution or the laws of the State or by the Constitution or laws of the United States ”.

“It’s very confusing to call this an improvement in hate crime because it has nothing to do with anything people would normally consider a hate crime,” Rosky said.

“But how are they going to prove that she was not only trying to annoy the police, but actually scare them?” And prevent them from exercising their constitutional rights? I do not even know. I mean, they have guns. They will not be physically afraid of a woman who tramples on a sign.

The wording of this section was due to an “unsuccessful attempt” to pass hate crimes law in Utah decades ago, Rosky said. This law was passed under the Hate Crimes Sanctions Act, which was intentionally vague to avoid lawmakers block law due to specific protections for LGBTQ + community, according to Rosky.

“The compromise was this law,” Rosky said. “It does not mention any particular characteristic. It is only a matter of intimidating and terrorizing people… to prevent them from exercising their constitutional rights. … We have the constitutional right to do just about anything except things that are illegal.

“If someone is bullying a person, you could say, ‘Well, they bullied him, in an attempt to prevent him from exercising his constitutional right to walk on the streets. “… So every crime could be charged under this law. , which suggests that the law is vague, too broad and unconstitutional. “

In this case, a ninth grade girl was taunted by a classmate on her way home, and the boy was “yelling racial slurs at her and engaging in racist rascality” while throwing snowballs at her. .

When the boy and his friends joined her, she called him an asshole and pushed him around. In return, he made another racist remark and pushed the girl “back with enough force to make her fall on the street.” The next day at school, the boy pushed her with his shoulder and “repeated an offensive remark from the previous altercation.”

Although the evidence in the case suggests that the boy’s actions were racially motivated, there was “insufficient evidence to support improvement under section 76-3-203.3 (3 ) ”, – in particular, that the boy intended to make the girl“ fearful of freely exercising or enjoying any right. ”Thus, in that case, the Court of Appeal concluded that he There was not enough evidence to support the increased assault in the “Exercise of Rights” law, overturning the boy’s increased sentence.

“[The ‘Back the Blue’ incident] is not a hate crime, ”Rosky said. “And it’s not even charged with a hate crime. It’s accused of being a crime of intimidation and terrorism, and even then it’s a very strange adjustment.

“I think there is a very good argument that the law they are accusing him of in itself violates the free speech clause because it is unconstitutionally vague. Certainly, if it were applied in this case, it would pose very serious problems under the freedom of expression clause. Because all she did was stomp on a sign.

What lawmakers do to work out of state

Atlanta Estate Planning Lawyer Oren Ross discusses the upcoming new tax changes and what you should do now to prepare!

1L course through an IP lens