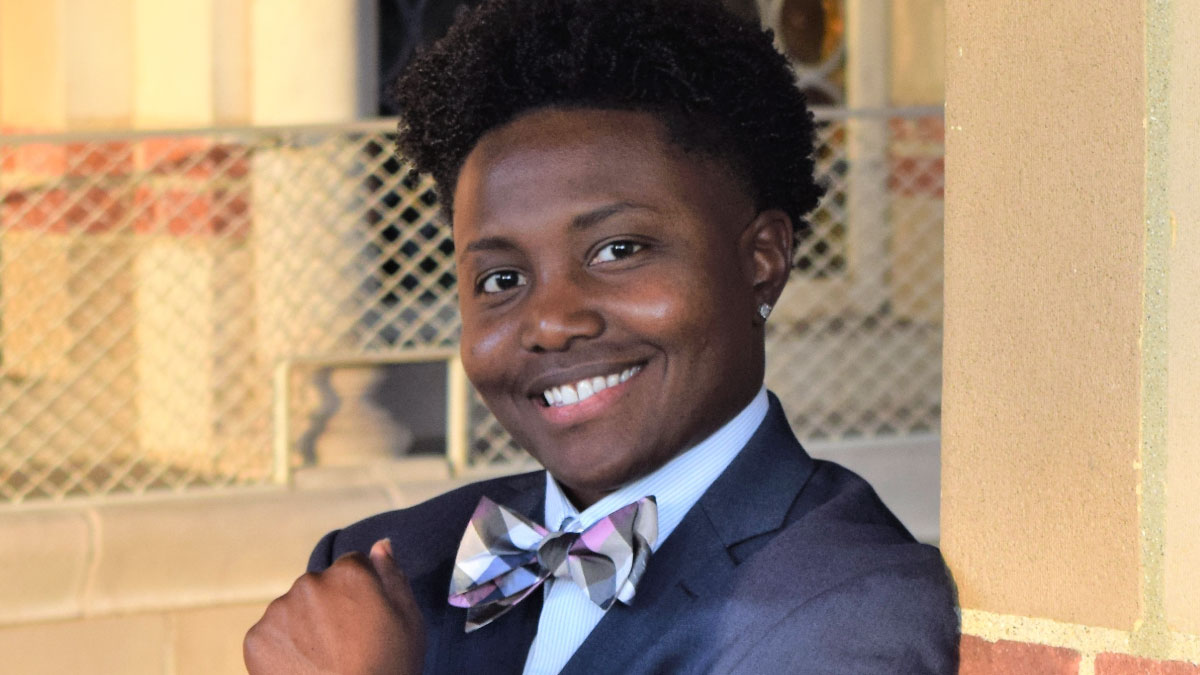 Zekiah Wright is a pioneering lawyer representing LGBTQ workers who have experienced unfair discrimination from their employers. They are also co-chairs of the West Hollywood Lesbian and Gay Advisory Council. Wright spoke with WEHOville about their coming out story, what brought them to California, and their personal feelings about some of the biggest issues the LGBTQ community faces on WeHo.

Tell us the story of Zekiah – where did it all start?

I grew up in Winter Haven, which is a small town between Tampa and Orlando (Florida). And then I went to undergrad at Stetson. And then I went to law school at Florida A&M which is in Orlando, so I spent quite a few years in Orlando working and studying law. I moved to California in 2017 and started my own law firm. The motivation behind this was that the old company I worked in sort of gave me all LGBTQ employees that we represented and I think the employees have always been very grateful for that. They felt like we could connect on a different level, and I just thought about why I wouldn’t start a company whose goal is to represent identified LGBTQ employees. And that’s kind of how I ended up here.

What was your experience growing up in Florida?

I knew by the time I got to law school I was sure I wanted to go, I just hadn’t identified where. I mean, this is the south, right? So all kinds of typical things that are associated with the South were quite prevalent there.

When did you go out?

And you are now…?

What was it like going out to college in Florida and the South at the time?

I don’t even think I had the language of coming out. My mom found out, and I was like yeah, that’s kind of what I like – I like girls, you know? It was hard. My family is Southern Baptist and so I think for a few years it was kind of ‘just don’t talk about it’, right? It was sort of my family’s approach. And then when I was 20 and was seriously dating someone, I would take them to different vacation functions and it kind of became known and people felt comfortable with it. , and now my mom loves my current girlfriend. She’s getting more and more familiar with the language and we’re having conversations about it so it’s very different now. But I think at first it was kind of like “pray for it and you’ll be healed.”

Do you mind sharing how she found out you were gay?

My older brother overheard a conversation between me and my girlfriend at that point, just talking about our relationship and interaction, and I had no idea he was listening. so when i opened the door i was like, “hey, what are you doing here? And his face was fuming, and he was like, ‘I’m telling mom’ and that’s what she found out.

How did you meet your girlfriend at the time?

She was my best friend at the time. I was doing a school project at a classmate’s house and she just randomly kissed me and I was just like ‘OK’, and to her I think she was kind of joking, and to me that meant something. something bigger. So I remember being so confused the rest of the time we were there, then I called my best friend. I was like ‘so and so kissed me’ and I really liked that and she was just like ‘Oh!’ and it kind of opened up where she was like, ‘Well, I’m curious too.’ And then it was sort of my first girlfriend who was originally my best friend at the time.

What made you want to study law?

I think my first memory was watching a politician on TV and telling him that he was a lawyer and that he spoke about any subject at the time. I’m pretty sure I was 7 or 8 and remember that for a school project we had to write what we wanted to be. I wrote that I wanted to be a lawyer and I was 8 or 9 years old at the time. In my mind, I just associated being able to do good with being a lawyer, and I was like “I want to do this.”

Did you plan to work on behalf of LGBTQ causes?

It wasn’t until I was working in the DC firm that this sort of thing became what I wanted to focus on. I think after law school I was like “I don’t know what I want to do”. I looked at all of these different areas and thought to myself “No, I don’t like any of them.” And the firm I started working for was dealing with employment law on the plaintiff side and it also dealt with other areas that I really enjoyed doing. And then that’s where it kind of fell into place in my mind. And in my law school, there was no LGBTQ bar association, which is crazy because there were so many bar associations for all other interests. There was like animal rights, black students, constitutional law, but there was no LGBTQ. So me and a few other law students actually created the first LGBTQ bar association in my law school and I was its founding president. I think this maybe planted a seed, but I wasn’t quite sure what I wanted to do or how I wanted to bring my personal interests and experiences to what I was doing professionally.

How did California come into play?

I wanted to get my law school degree early so I found this program at Pepperdine where you could just go during the winter months and get some extra credit so you can graduate earlier. And so I came to Pepperdine and absolutely fell in love with it. By the time I got off the plane my then-fiancée was with me, and we went to rent a car and got ready to explain that we both wanted to be on the car rental, we were partners , we were a woman – like all that. And we walked in and we said to the guy, and he was like ‘OK cool’ and there were no more questions about it. If it was Florida, we would still be there trying to explain to her how we were partners, so it was like my first experience. Then we walked around Santa Monica and we were holding hands and nobody cared and it just wasn’t my experience in Florida. In Florida, it was just better not to do it, because you didn’t want to attract attention, and so here I was like nobody cared, and I think that’s what has. sealed the deal for me. When I signed up to the California bar people thought I was crazy. They were like, “You didn’t go to law school in California, it’s the toughest bar in the country, why are you doing that?” and I was like, ‘I have to live there.’ And I took the bar and passed the first time.

Board member John D’Amico appointed you to the Lesbian and Gay Advisory Council. What ideas did you give him at the start?

I think I was really interested in seeing more people of color represented in the city, in terms of companies, boards and commissions, and having our interests taken into account more. I know my friends and I, we were always coming to West Hollywood but we didn’t see a lot of us represented in ownership or even a lot of patronage, depending on which bar you are in. So I was like, “We’re here, we’re spending the money, some people live here, but I don’t think there’s any particular interest in keeping us here, OR in meeting the needs that we have that. are different from other bands. So I told him about it, and he said, “Yeah, okay, let’s see what you can do.”

What do you think have been your greatest accomplishments on the board so far?

I’ll call it a pre-fulfillment. So right before COVID happened, my idea was for us to have a panel with all the women of color who were more masculine and who were sort of discussing, especially in the workplace, our needs, their differences, of how we want to be approached, respected, how to have these conversations with our colleagues. The ideal demographic would have been employers and just people who work in professional environments to come and listen to this panel. I wanted to go to one of the local restaurants or bars and have some kind of meet and greet where we could really exchange information and serve as a kind of support system for ourselves and for the people who want to support us . And so we’ll see once the restrictions are lifted for in-person urban activities, how we can achieve that. it’s one of the things I’m really excited to do.

What do you think of gender neutral bathrooms in WeHo?

I think the city has the right idea. I don’t understand how people find this so problematic. For me, it’s almost obvious. Of course, gender neutral bathrooms. We do not care? We all piss side by side anyway. We’re not here hanging around for hours. It seems like such a non-issue to me and I know it’s been such a huge issue obviously across the country, but more particularly in West Hollywood. I was really surprised by all the backlash and the community members who really oppose it. I just think we should move on. It doesn’t change the experience of people in the bathroom.

What about the controversy over the repainting of pedestrian crossings in the colors of the flag of progress?

So LGAB, I think we voted unanimously for the progressive flag to replace the rainbow flag and I strongly support it. I mean, if we stay true to the progressive cities mantra and the city also does things to help tackle things like racial injustice, for me it’s only natural that we are inclusive in this way so that people feel thoughtful and somewhat protected. It’s a small gesture that uplifts black and brown communities and trans communities. I think this is another obvious fact. But I know that it was not so easy for some boards to make the decision to make the progressive flag the flag of the crosswalk.

Would you like to support a general update of all West Hollywood rainbow flags with the colors of the Progress Flag?

Yeah I think so. We are a city where others come together, so why not celebrate each other?